With the generous support of many parishioners, Bethesda has begun several long-deferred projects aimed at securing the stability and beauty of our historic building for decades to come.

In 2017, six windows facing Washington Street (including our signed Tiffany angels in the upper gallery) were secured with protective glazing and ventilation to prevent corrosion. The work was performed by experts from J & R Lamb Studios, with funds provided by the proceeds of Bethesda’s annual August Building Fund event.

In 2018-19, one more window was restored, this one on the east side of the building, near the transept. The window was removed from its opening, taken to New Jersey and re-leaded by Lamb’s craftsmen. Upon return in Spring 2019, a new wooden molding was installed, because the old one had rotted. Again, protective glazing and ventilation were installed, and this valuable asset was secured for decades to come. Funding was provided by proceeds from Bethesda’s annual August Building Fund event.

In 2019, Bethesda’s High Altar Reredos depicting Jesus the Good Shepherd, as well as Saints of both Old and New Testaments, was cleaned and restored to its original vibrancy. Artists deployed through Lamb Studios meticulously cleaned the work, in-fill painting was done, and protective compound applied that will make this priceless work more visually present for many years to come. Artistic contractor was Mr. Valentine Michalski, an accomplished art conservationist. The generosity of Stephen and Joan Hyman made this priority a reality. 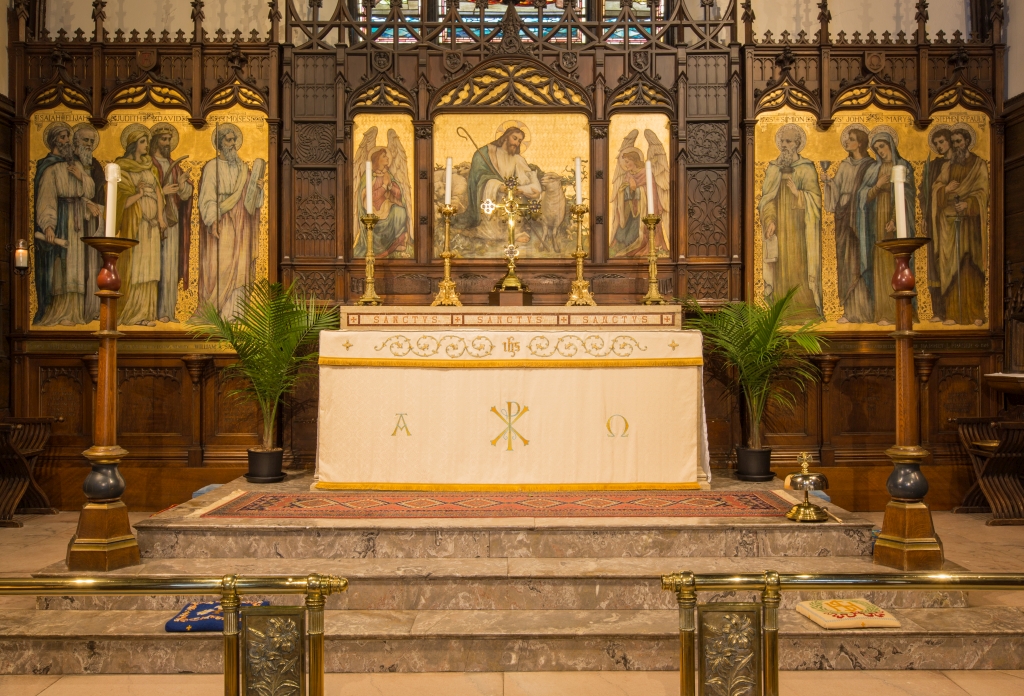 Altar and Reredos May 2019; photo by Jane Agee

Next up: Front Door

In 2018, the parish’s August Building Fund event was dedicated to making needed repairs and changes to the front doors of the church. The plan is to reverse the swing of the wooden doors, to an outward direction rather than inward. Allowing doors to be opened while the church is in use will provide a vision of our interior to passersby, and perhaps a silent invitation to enter for meditation, inquiry or participation. Implementation of this project has required detailed and careful scrutiny by architects and craftspeople consulted by Vestry and Building Committee members. The goal is to have an entry that is respectful both of the building’s historic character, as well as of building codes, common sense and overall cost.

As part of Bethesda’s capital projects plan, an extensive restoration of the church building is anticipated. In 2015, the parish received a study grant from the New York Landmarks Conservancy  toward the cost of a study of existing conditions by our expert architectural team at John G. Waite Associates, Architects, of Albany, New York. The results of that study, the Existing Conditions Report, detail many measures the parish should take to keep our historic building in good condition, and to make a number of lasting improvements. Individuals have asked if financial assistance may be directed toward the building restoration. Inquiries may be made to the parish office, and/or to Capital Campaign co-chairs Mary Withington or Gordon Boyd.

Our ministries, and our expenses, continue while our building is closed. Thank you for your support.

Please use the button above to donate using Paypal or a credit card. Checks may be mailed to the church office.

For Email Marketing you can trust

Our Office is at:

Please send all mail to this address